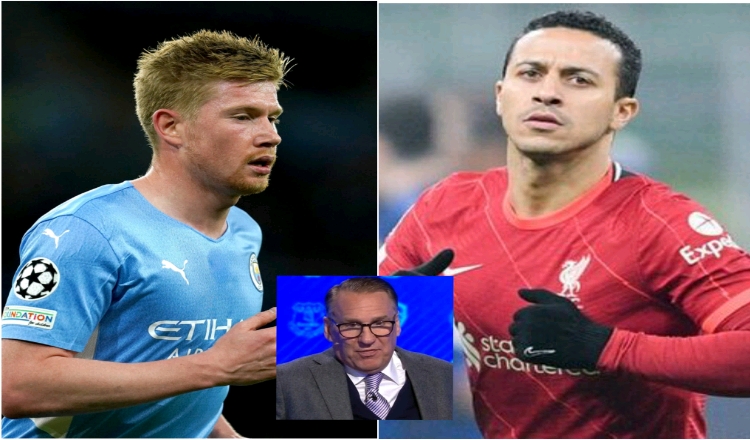 Thiago Alcantara, a standout for Liverpool, has been ranked as the second-best midfielder in the Premier League by Paul Merson.

The lauded former Barcelona and Bayern Munich star joined Jurgen Klopp’s team in September 2020, and after a sluggish beginning marred by injuries, he has since developed into one of the most crucial members of the Reds’ starting XI.

For Liverpool, Thiago is now so crucial that the team would nearly be lost without him.

His significance to the Reds was demonstrated in their most recent game, a 2-1 Champions League victory over Ajax.

“Thiago Alcantara is an unbelievable footballer, he’s a class act, Paul Merson wrote in his column.”

“When he doesn’t play, Liverpool are a completely and utterly different team and we’ve seen that a handful of times already this season.”

“When he first joined, there was a lot of talk that he slowed Liverpool down a little, but after he adapted to the pace of the Premier League, there’s been no stopping him.”

“I just like the way he plays and moves – he’s always looking forward and is more than comfortable with playing one-touch football when the situation calls for it.”

“I like players who see things on the football pitch before they happen and he’s one of them, which is why I’m such a big fan of him.”

“People might be a bit surprised with Thiago’s inclusion at #2, but this is how I see the game and I genuinely believe that this guy is a special player.”

“We’re talking about a world-class player who makes such a huge difference to a team like Liverpool – we saw it first-hand against Ajax when he started the game and absolutely ran the show for his team.”

“These lists are obviously very subjective and could change every week, but Thiago is a player I’ve always rated over the years.”

The Spaniard has won the Champions League With both clubs.